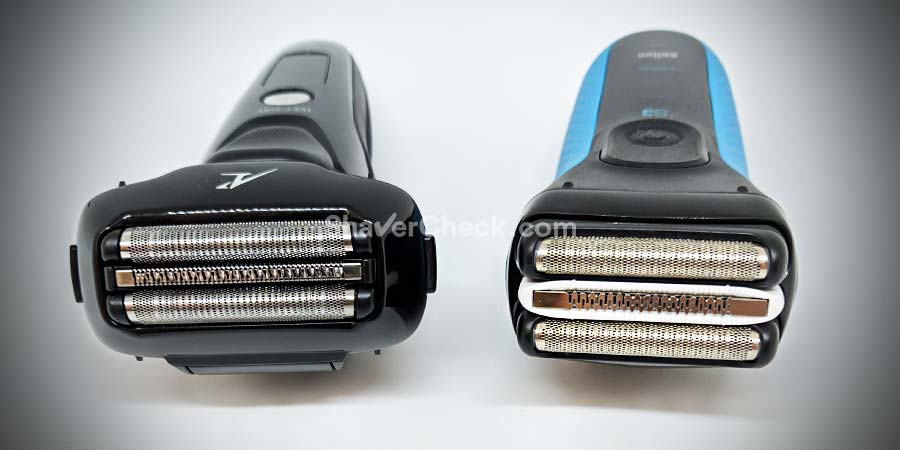 The reasonable purchase price, low costs of ownership and the excellent price/performance ratio are among the things that make these razors very appealing to the potential buyer.

In this head to head episode, we’ll take a close look at two of the best entry-level electric razors, namely the Panasonic Arc 3 vs Braun Series 3.

We’ll find out how they stack up against each other in some key aspects and we’ll also see where one would make a better choice than the other.

Both the Arc 3 and the Series 3 have been around for quite a while. During this time, both lines have seen new models being added to the current lineup.

The old and new Panasonic Arc 3

Panasonic’s Arc 3 family of shavers was launched in 2008 and until 2015 there have only been incremental updates, consisting mainly in visual improvements.

Therefore, the shaving performance has remained pretty much the same throughout the whole Arc 3 line.

The new models introduced in 2015 by Panasonic, called the LT-series, are a clear departure from the older ones, going for a more premium positioning.

This is also reflected in their price which is a bit higher than what most would be willing to pay for an entry-level razor.

But lately, even these models have started to see significant price drops and can sometimes be found at the same price as the old models.

As for the performance, it has remained pretty much consistent, at least for all the models that are fitted with 13 000 CPM motors (more details later on).

Braun has also updated its Series 3 line in late 2015 and called it the Series 3 ProSkin, but it was more of a visual makeover of the older models.

The prices are also similar, however the previous models (340s, 380s, .etc) have mostly been phased out and can’t be found anymore. As such, we’ll only be referring to the newer Series 3 ProSkin.

Takeaway: all the different razors in Braun’s Series 3 ProSkin are pretty much identical in terms of performance; the same goes for the Arc 3 shavers from Panasonic.

The differences between two Arc 3 or two Series 3 razors mainly come down to design and included accessories as seen in the example below:

Panasonic Arc 3 vs Braun Series 3: what are the differences?

Both the Panasonic Arc 3 and the Braun Series 3 are reasonably priced electric razors, featuring a shaving head with 3 individual cutting elements.

As all entry-level shavers, they are best suited for shaving daily or every other day, offering excellent performance for the price.

Let’s now address the things that interest us the most in this Panasonic Arc 3 vs Braun Series 3 comparison, the actual differences.

1. Closeness of the shave

Getting a close shave is probably very high on the priority list of anyone looking to buy an electric shaver.

While a more advanced razor like the Braun Series 7 or a Panasonic Arc 5 will provide a closer shave, the Arc 3 and Series 3 can yield very good results, especially if you follow a few simple tips.

However, in my personal experience, I have found the Panasonic Arc 3 to be better than the Series 3 from Braun when it comes strictly to the closeness of the shave.

I can attribute this to the more powerful 13 000 CPM motor that was fitted to the Arc 3, their 30 degrees sharp blades and to the curvature of the foils (thus the Arc in the name) which ensures optimal contact with the skin. 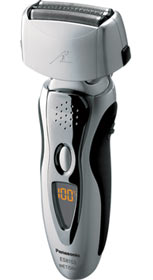 Also, the Arc 3 feels faster and completing a shave takes slightly less time if your beard is short.

It’s worth mentioning that the performance will be the same in the case of all the Arc 3 models fitted with the 13 000 CPM motors.

So the ES8103S above is not the only option and you might as well opt for a different one (as long as it’s not using a less powerful motor).

For example, the ES-LT41-K or the new ES-LT3N-K are equally good options as well.

2. Comfort during (and after) the shave

When it comes to comfort, the Braun Series 3 has the edge, at least in my experience and especially during a dry shave.

The difference is not massive and some may not even notice it, but it’s important to take this into account if you have sensitive skin.

A Series 3 razor feels smoother and gentler to the skin, while the Arc 3 shavers are a bit more aggressive. The downside of providing a closer shave is a small tradeoff in comfort.

Also, this is only true in the case of the Series 3 ProSkin models like the 3040s above; the regular, basic Series 3 like the 300s comes with a different shaving head that doesn’t perform as well.

All Panasonic Arc 3 come with an integrated trimmer, while certain models from the Series 3 don’t have one (those also have a lower price).

For example, the Series 3 ProSkin 3010s doesn’t have a trimmer.

Panasonic’s popup trimmers are suitable for light grooming and trimming your sideburns, mustache, and goatee and are generally sharp and very efficient. 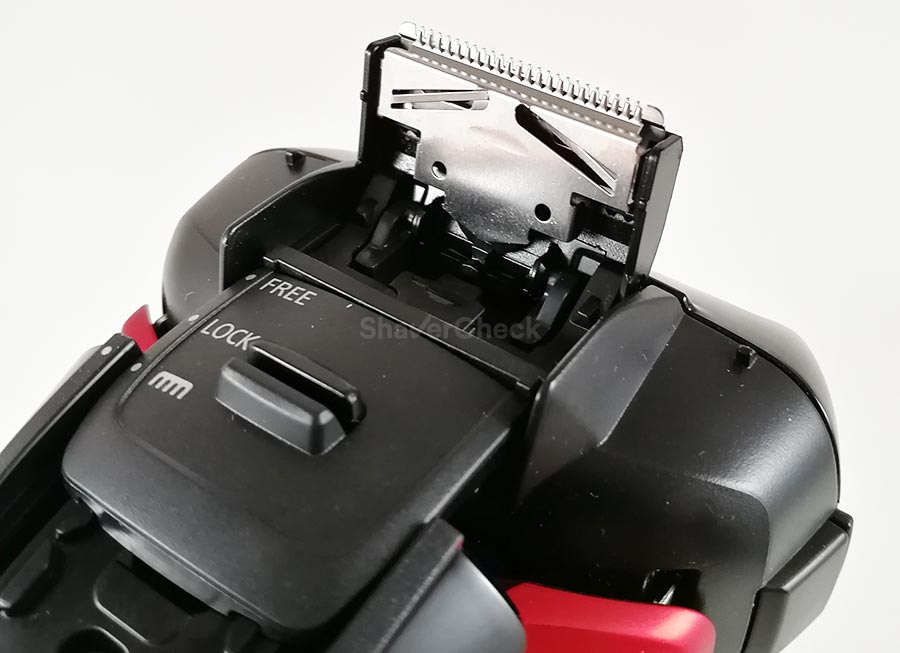 Their main drawback is related to the positioning — behind and perpendicular to the shaving head.

This can make it more difficult to see what you’re doing. A workaround that I found to be quite effective is to remove the foils and the two inner blades.

The long hair trimmer found on the Braun Series 3 razors extends beyond the shaving head, but it still suffers from the same problem to some degree.

Likewise, you can remove the shaving head to get a better view of what you’re doing.

However, Braun’s trimmers seem to be rather dull and you have to go over an area many times to get all the hairs.

Overall, the pop-up trimmer on the Panasonic Arc 3 is definitely better compared to the one on the Series 3. But even so, they are pretty useful for some light grooming, so I would still consider a Series 3 model that comes with one.

All Panasonic Arc 3 shavers are suitable for wet & dry operation. They’re also fully waterproof, so you can use them in the shower as well.

Panasonic shavers work particularly well with shaving cream, so if you’re into that definitely consider an Arc 3.

Braun opted to include razors that can be used wet & dry or dry only in the Series 3. I wouldn’t consider this a minus as you’ll just have to pick one depending on how you’ll be using it.

In this article you’ll find a detailed comparison table and see exactly which models from the newer Series 3 allow wet & dry use.

An electric shaver that is suitable for wet&dry use can only be operated cordless as a safety precaution.

That’s the case with all Panasonic Arc 3 models.

On the other hand, there are a few dry only Braun Series 3 models that will also work with the cord plugged in.

Some users consider this a must-have feature and if you’re one of them, then you should consider the Series 3 over the Arc 3.

The pick of the range seems to be the Braun Series 3 3000s, a dry only model that usually has a very reasonable price.

Even though it’s only suitable for shaving dry, the razor is still waterproof and can be washed with water.

6. Price and cost of ownership

A Braun Series 3 razor and a corresponding Arc 3 from Panasonic, both similar in terms of accessories and capabilities, will also have relatively similar prices.

Of course, you can find one or the other at some great discounts and in that case, you should probably go for the cheaper one. For example, the Braun Series 3 3040s can even be found at half the regular retail price.

However, when it comes to ownership costs, Braun is the clear winner.

All Braun Series 3 ProSkin shavers use the same blades and foils head, called a cassette. These cassettes are priced lower than the corresponding parts for the Panasonic Arc 3.

Moreover, the blades used for the Arc 3 razors, even though they seem sharper at the beginning, tend to become dull faster, so you’ll probably have to change them more often.

Cleaning cartridges will also increase the running costs if you opt for a model with a cleaning station. However, there are cheap third-party alternatives for Braun’s cleaning solution.

It’s also important to note that since both the Arc 3 and the Series 3 have many models, older or newer, the prices can vary to a high degree. So definitely check out as many as you can before buying a particular one.

I would also recommend staying below a certain threshold (at least for the models that don’t include a cleaning station) as there are better alternatives for that money (like the Panasonic Arc 4 or the Braun Series 5).

Both Arc 3 and Series 3 offer razors that are available with an automatic cleaning station. However, just the dry only variants from Braun’s Series 3 can be bought with one.

I consider Braun cleaning stations necessary from the Series 5 and up, but I don’t really see the need for one with the Series 3.

Yes, the shaving heads used by the Series 3 are a bit more difficult to clean manually compared to the Arc 3 since the blades are integrated into the cassette, but it’s still pretty straightforward. 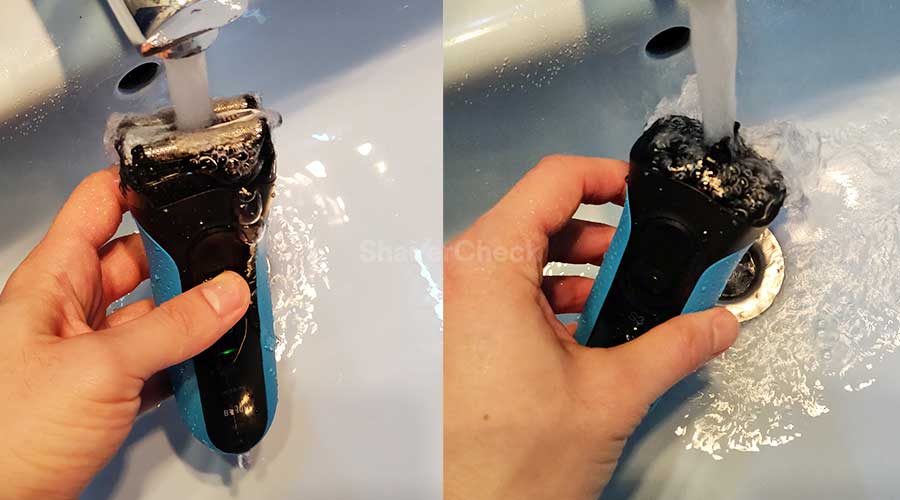 If you still want the convenience of a cleaning station, make sure to check out the Braun Series 3 3050cc below. You can also read my in-depth review of it here. 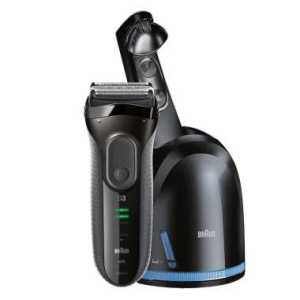 You should also look at older Series 3 models, like the 350cc-4 as you might be able to grab one at a nice discount.

If you choose to save some money and skip the cleaning station, then you’ll have to manually clean your razor after every use.

In this case the Panasonic Arc 3 shavers are easier to clean as the foils and blades can be separated for a more thorough cleaning.

You can get a cleaning station as well with the Arc 3, however I would recommend you to save some money and skip it. 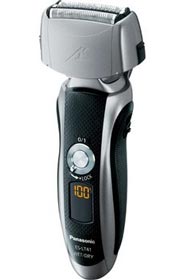 Panasonic Arc 3 vs Braun Series 3: which one should you choose?

While both the Arc 3 and the Series 3 offer very compelling features, due to their differences, there can be situations where one would make a better choice than the other.

Let’s now settle the Panasonic Arc 3 vs Braun Series 3 dispute and see which is the right one for you.

Choose the Panasonic Arc 3 if you:

Choose the Braun Series 3 if you:

Lastly, since you can’t go wrong with either of the two, don’t neglect the purchase price.

Since these are budget electric razors, the price should be a decisive factor when making your pick. So if you stumble upon an Arc 3 or a Series 3 shaver at a great price, simply go for it.

Over to you now: what was your experience with these electric razors? If you have any other questions, make sure to post them in the comments section below.

Home » Articles & Guides » Head to head » Panasonic Arc 3 vs Braun Series 3: Which One Is Better?

30 thoughts on “Panasonic Arc 3 vs Braun Series 3: Which One Is Better?”