The Braun Series 3 line has long been a favorite among electric shaving enthusiasts.

The reasonable price, decent performance, and the inexpensive replacement parts, all backed by Braun’s notorious reliability, were the key ingredients to the product’s success.

After several years of very strong sales, in 2015 Braun decided to revamp its line of entry-level shavers.

Let’s take a closer look at what they have to offer and then check out the most important differences between the various Series 3 models.

The new Series 3 from Braun is a no-frills family of electric shavers aimed at the budget-conscious buyer.

It features a simple 3 blade fixed shaving head. The 3 shaving elements are however independent and can move freely. 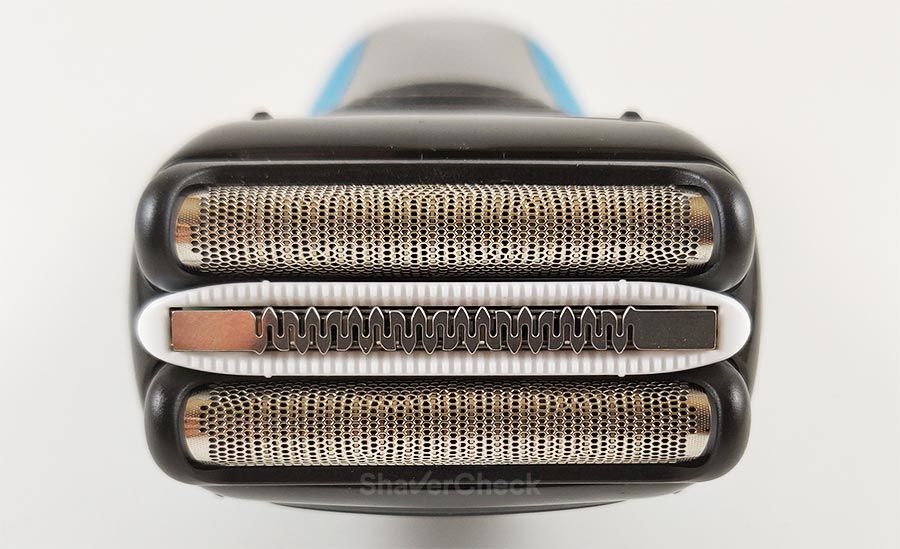 As with all modern Braun razors, the blades and foils are integrated into a single piece called cassette. 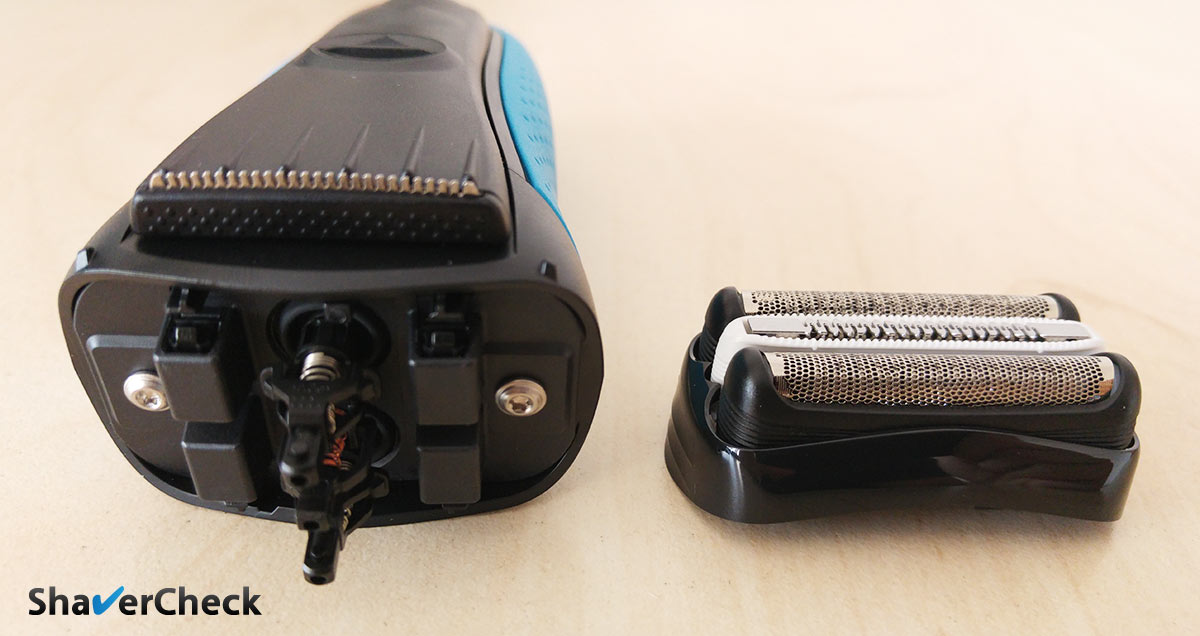 As we know from the older generation, these cassettes offer great value for money as they are inexpensive (at least when compared to similar shavers from Panasonic for example) and must be replaced only once every 18 months.

They are also backward compatible with the old Series 3 like the 340s, 380s and so on.

The design of the current shavers is sleeker and more refined, but again, nothing too radical. They are still instantly recognizable as Braun Series 3 razors.

The new Series 3 lineup is actually comprised of 3 distinct subfamilies of electric shavers.

They are also the least expensive Series 3 variation, but that comes with a few shortcomings: there’s no slide-out hair trimmer and the shavers are fitted with a smaller battery that provides only 20 minutes of cordless operation.

The dry only models (for example, the 300s) will however work while charging.

The basic Series 3 shavers also come with a different shaving head than the rest of the Series 3 (part number 21b).

You can however use the revised shaving head (32b/32s) as it will fit just fine.

The 21b cassette is inferior in my opinion to the 32b; it’s not as comfortable nor as smooth and seems to require more strokes in order to get a clean shave.

In order to differentiate the new razors from the old Series 3 line, Braun decided to use a simple, but effective name scheme by only adding a 0 after the 3. For example, the old Series 3 340s is now the 3040s and so on.

The ProSkin models are also available with a cleaning station — for example, the Series 3 ProSkin 3050cc.

Performance-wise, the ProSkin models aren’t much different from the basic, entry-level Series.

They do have a nicer design and better ergonomics, mainly to that textured rubberized sleeve.

The main difference is the shaving head (32s/32b) that has a revised hole pattern, supposedly helping to catch the hairs more efficiently. 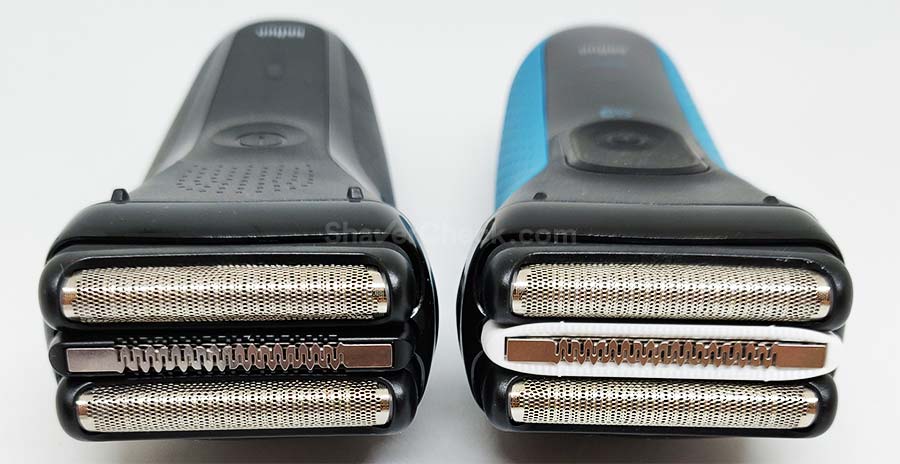 Here’s a table showing the main differences between the most popular Series 3 ProSkin models.

The dry only models will also work with the cord plugged in, so if that’s important to you, you may very well opt for one of those.

The wet & dry Series can only be operated cordless as a safety precaution. 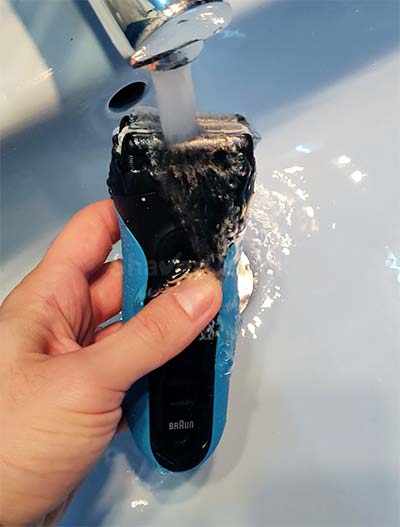 All Series 3 shavers (including the dry only models) are waterproof and can be rinsed under the tap for effective cleaning.

The Shave&Style models are basically the exact same models of the Series 3 (300s) and Series 3 ProSkin (3010s and 3000s), but they also include a trimmer attachment and 5 combs.

As a result, you can swap the shaving head and use the trimmer with the attachments to maintain a beard or even to shave your head.

As the names suggest, they are basically the Series 3 ProSkin 3010s and 3000s respectively, but bundled with the aforementioned accessories for styling the hair/beard.

You can also purchase the trimmer attachment and combes separately and use them with any Series 3 model. The part number for the set is 32BT.

There’s also a 300BT based on the basic Series 3 300s, but I wouldn’t really consider it because of its smaller battery and the 21b cassette.

Which Series 3 model should you buy?

That decision should really come down to two factors: your budget and your personal requirements.

For example, the basic Series 3 should be very appealing due to its low price.

The smaller battery is a minus, especially in the case of the wet & dry models like the 310s that will not work while charging.

Also, the entry-level Series 3 only has a low charge indicator, so that could take you by surprise when you least expect it.

There is a 5-minute quick charge feature that should provide enough charge to complete one shave.

Some users consider the ability to use a shaver cordless and corded a must-have, so if that’s the case, you should check out some of the dry only models.

The Braun 300s is one of those and likely the cheapest Series 3 you can buy right now.

The 21b cassette is my main gripe with it, but as mentioned previously, you can actually upgrade to the better 32b/32s. 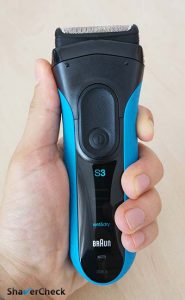 You can usually get them for not a whole lot more money compared to the 300s above.

For example, the 3040s is often discounted and thus offers fantastic value for money.

It’s also fitted with a slide-out trimmer. And while far from being great, it’s still useful for some light grooming.

Alternatively, there’s the Series 3 3010s that I reviewed here and it’s basically identical to the 3040s, minus the slide-out trimmer. 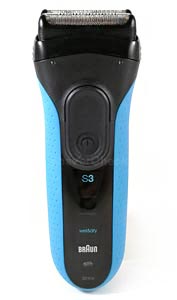 However, if you can get it for significantly less money, I think it’s a solid option.

Finally, the dry only ProSkin 3000s can be used while charging, so again if that’s a must-have for you, it can be bought for a very reasonable price.

Again, no trimmer is present on this shaver, but that’s not a deal-breaker in my opinion.

Performance-wise, all the Series 3 ProSkin are exactly the same, so you should only consider the price and accessories/features when deciding which one to buy.

So what about the cc Series ProSkin models that come with a cleaning station?

Well, they are usually quite pricey for an entry-level razor and to be honest, the shavers are pretty easy to clean manually.

The station seems to remain unchanged from the previous Series 3 generation and it uses the same alcohol-based Braun CCR refills.

The Series 3 ProSkin 3050cc is one of the models that include the cleaning base and again, it looks like the top pick as it usually costs less than the other similar models (3070cc, 3090cc).

For more details, you can also check out our review of the 3050cc.

IMPORTANT: the Series 3 s models (solo) that didn’t originally come with a cleaning station will NOT work with one. So if you’re thinking of buying an s model (e.g. 3010s, 3040s, etc.) and use it with an existing station or you plan on getting one later on, it will not work. Only the cc shavers (like 3050cc, 3090cc, etc.) will be compatible with the station.

As mentioned previously, a very interesting addition to the Series 3 is the set of compatible accessories designed specifically for men who maintain a beard. 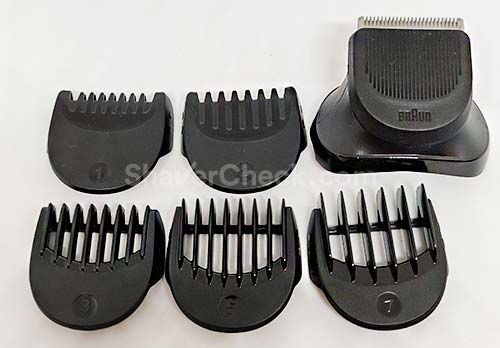 Precisely, we have a trimmer attachment that looks very similar to a regular facial trimmer and can be used to trim your entire beard. 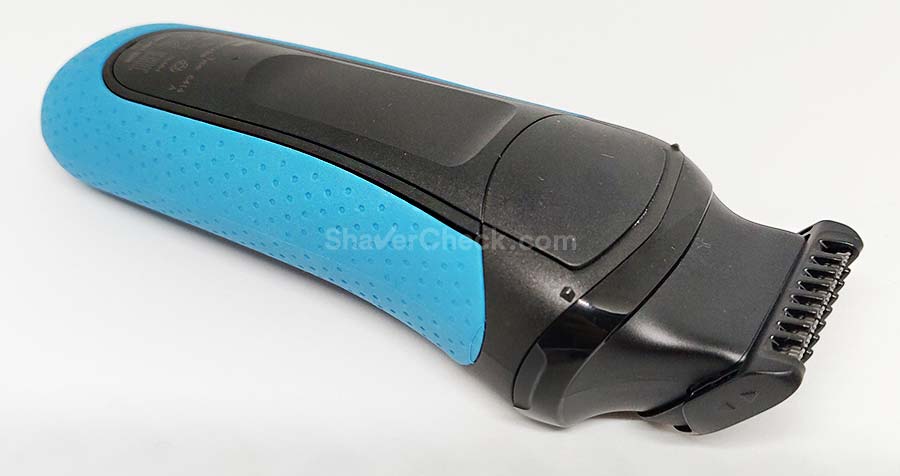 You simply pop out the regular cassette and insert the trimmer in its place.

There are also 5 combs with different lengths (1 to 7 mm).

You can buy the trimmer attachment and combs separately and use it with your existing Series 3 or you can buy it as a package with the shaver included (for example, the Braun Series 3 3010BT Shave & Style is such a model).

Who should you buy the Braun Series 3?

As mentioned earlier, the Series 3 is Braun’s entry-level family of electric razors for men.

If you’re not particularly demanding when it comes to the closeness of the shave and you don’t want to spend a lot of money on an electric shaver, the Series 3 is one of the most compelling offerings out there.

They’re priced quite reasonably, especially the dry only ProSkin models that represent a great compromise in my opinion.

The Series 3 shavers work best when used on shorter facial hair, but perform better than other similarly priced foil shavers from the competition when used on a 2 or 3 days beard.

They are arguably the most comfortable electric razors in this price range as well, so if you have sensitive skin, definitely consider them.

The Braun Series 3 would also be an excellent choice for a beginner or a teenager. They are really easy to use, clean and cheap to maintain.

They’re usually cheap to buy as well and you can often find several Series 3 models for a bargain price.

And as we saw, as far as shaving performance goes, they are all basically the same.

Overall, the new Series 3 is a welcome revamp of an already excellent line of shavers; while it doesn’t bring any major improvements, it will most likely help Braun maintain a top position in the entry-level market of electric razors.

Home » Articles & Guides » General » Braun Series 3 Comparison: Which One Should You Buy?

194 thoughts on “Braun Series 3 Comparison: Which One Should You Buy?”