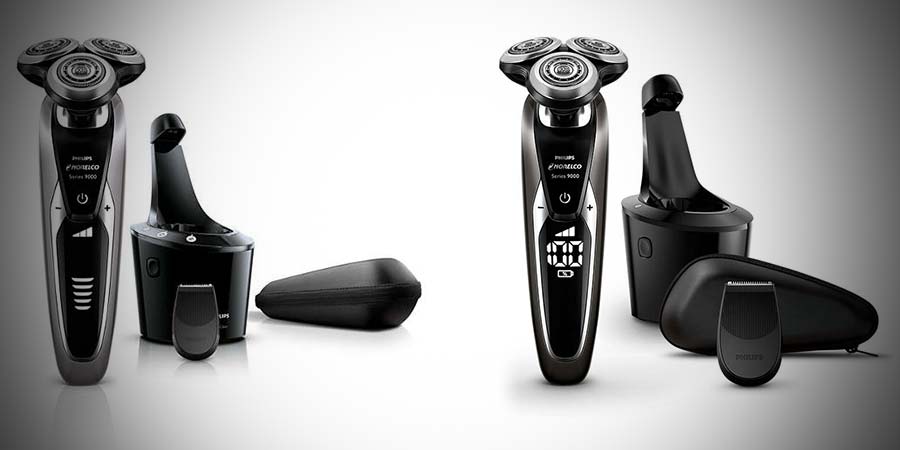 The Philips Norelco 9300 vs 9700 is the battle of the ultimate electric razors in Norelco’s high-end range.

They incorporate the most advanced technologies that the company currently has to offer, resulting in what are arguably two of the best performing rotary shavers you can buy today.

And that inevitably begs the question: should you choose the Philips Norelco 9300 or the 9700?

Philips has probably the most confusing naming schemes of all manufacturers for its various shavers.

Add to that the constant re-branding of older models, the release of new products, inconsistent model numbers (9800 is inferior to the 9700 for example) and you’ll probably have a hard time making a choice.

In this Head to head edition, we’ll take a close look at the differences between the Philips Norelco 9300 and 9700 and find out which one represents a better option.

A short overview of the Philips Norelco Series 9000

The 9300 and 9700 are part of the Series 9000, representing Philips Norelco’s line of high-end electric shavers.

The 9300 and 9700 come with the SmartClean cleaning system which automatically cleans, dries, lubricates, and charges the razor.

Unlike the majority of shavers that feature an integrated pop-up trimmer, Norelco offers a click-on trimmer for the 9300 and 9700 that can be attached to the shaver, very handy for grooming and touch-ups.

We’ll discuss all the important aspects regarding the 9300 and 9700 in greater detail below.

Upon a brief inspection, the 9300 and 9700 appear to be very similar in many regards.

They look almost the same and they use the same shaving heads (SH90). Both also feature three-speed settings (Slow, Medium, Fast) that should better fit your skin and hair type.

The differences are therefore quite subtle. Here they are:

The first visual difference is the color surrounding the display on the front of the shavers.

The plastic on the 9300 has a lighter shade of silver, while the 9700 uses a darker, gunmetal color.

The second difference between the actual shavers is how the remaining battery is displayed. The Norelco 9300 uses 5 bars, each representing 20% of the remaining charge:

The Norelco 9700 shows the exact percentage of the remaining battery:

The one used on the 9700 is probably better, being more precise, but it’s still a minor detail that shouldn’t be a decisive factor when choosing between the two.

The Norelco 9300 and 9700 come with automatic cleaning and charging stations called SmartClean.

This system will clean, dry, lubricate and charge the razor. It uses detergent cartridges and works pretty much as advertised.

The cost of ownership implied by the cleaning cartridges is quite reasonable when compared to Braun’s original cartridges for example.

The stations use induction heating to dry the shavers after the cleaning cycle has completed.

The main benefit of this implementation is a completely silent operation. The downside is that it takes a lot of time — around 4 hours according to Philips — compared to a station that uses a fan.

In real world use though, two hours will be enough to dry the shaving head completely.

The SmartClean systems that come with the 9300 and 9700 are the same and use the same cartridges.

The only difference is that the one included with the Norelco 9700 has an updated display, with a progress bar that spans across the top part of the station and fills up as the cleaning process advances.

The 9300 has a more basic display, with an indicator that only shows the operation currently taking place (like cleaning, drying, etc.).

But considering that it’s similar in price to the 9300 and identical in performance, I don’t think the 9800 is worth buying.

UPDATE: One of our readers signaled in the comments that as of 2016 all the 9000 Series shavers from Philips Norelco come with the same SmartClean station that doesn’t feature the progress bar anymore. This change can also be observed in the new product images and user manuals.

By this point it should be pretty obvious that the Norelco 9700 is basically a 9300 fitted with fancier displays.

However, the price of these two models can vary quite a lot as of 2021. 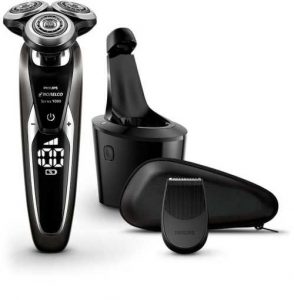 The 9300 usually offers better value for money and it is identical in terms of shaving performance.

And this is actually the only thing you should consider when trying to decide between the Philips 9300 and 9700 — the price. 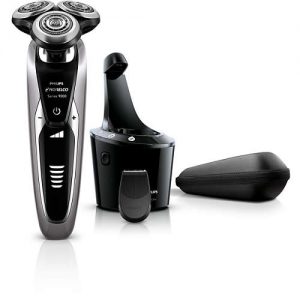 However, the 9300 is getting very difficult to find, which makes the 9700 pretty much the only option.

The conclusion of this Norelco 9300 vs 9700 debate is actually a lot simpler than in the case of other shavers we’ve compared in the past.

We can summarize it in the following statement: there isn’t a single compelling reason to justify the price difference between the Norelco 9300 and 9700.

And that should make your decision pretty straight forward: just buy the one that is cheaper (usually the 9300).

Apart from a few minor and mostly visual differences, the 9300 is identical in terms of performance to the 9700 and, at least at the moment of writing, it costs less.

Unless you can find the Philips Norelco 9700 at a similar price, the 9300 is the winner and the more sensible choice.