In 2019, just one year after introducing the revision D of its third generation Arc 5 line, Panasonic announced another update.

The new revision E shavers were launched in Japan in early September 2019.

There’s no information so far regarding a global launch, but considering that the previous revision was only available to the domestic Japanese market, it’s likely that these new revision E models won’t be officially released in other parts of the world.

However, that shouldn’t stop us from purchasing one as they will eventually be available on various online platforms.

Let’s take a closer look at the E models, see what they bring new to the table and what has remained unchanged.

In typical Panasonic fashion, the new model names follow the same pattern as their predecessors and the letter D is simply swapped with an E to differentiate them.

And at least from the official product photos, that’s the only way to tell them apart from the older models as the razors look almost the same.

For example, we now have a new ES-LV9EX replacing the previous ES-LV9DX (from the revision D).

Here is a product table of the new Arc 5 E lineup that showcases the most important differences between these models.

As it was the case with the previous two revisions, only the flagship ES-LV9EX comes with a few distinctive, premium-like features: brushed aluminum body, hard leather travel case (part no ES-2L13) and a smart lock function.

The last one basically allows you to unlock the shaver when you grab it and hold it in your hand, preventing accidental operation.

The rest of the revision E models feature a plastic body and a classic travel lock, activated by pressing and holding the power button for 3 seconds.

The performance is of course identical throughout the entire range, the differences consisting only in color, accessories and different battery level indicators.

The actual battery life is identical for all the E models (approximately 45 minutes of cordless only use).

They are fitted with a universal voltage converter (100 to 240V), so you will be able to use them anywhere in the world.

The shavers are waterproof, but because they will also work when plugged in, are only suitable for dry only use, so you cannot for example shave in the shower.

The new Arc 5 revision E shavers are equipped with what appears to be a revised outer foil compared to the C and D models. 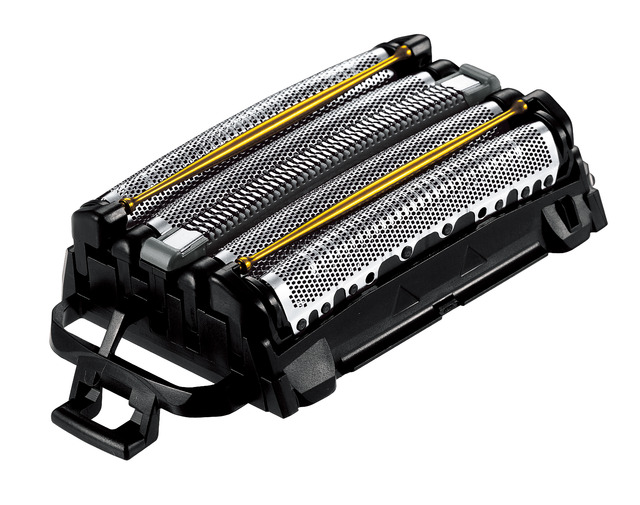 So far there’s no information regarding what exactly has changed in the design of the foil since again it looks extremely similar to the previous one.

The middle trimmer is now called a Slim comb slit blade, so that could be one of the changes.

It will also be interesting to see if the new ES9179 will be compatible with older Arc 5 models.

As I mentioned in this guide, all the Arc 5 foils and blades until (and including) the revision D could actually be used on older models, despite the lack of any official information.

The two removable inner blades of the new Panasonic Arc 5 revision E are the same WES9170 introduced with the very first Arc 5 generation.

The part number of the new foil and blades set is ES9038.

Everything else about the rev E shavers seems to be the same compared to the C and D, including a 14 000 CPM motor and a highly complex flexing system of the shaving head.

Panasonic does however mention an AI beard density sensor for the rev E that supposedly reads the beard density and makes real-time adjustments to the power output of the motor, ensuring a more efficient and comfortable shave.

With the previous models, the sensor was a bit inconsistent and not all that useful, so hopefully this time around it will be better.

The name does suggest that it uses some form of artificial intelligence, but we shall see how effective it is or if it’s merely a marketing gimmick.

You probably won’t be able to turn off the sensor and use the shaver in full power mode.

That’s one of the reasons why I still personally like (and recommend) shavers from the second generation Arc 5.

Should you wait for the new Arc 5 revision E models?

If you were planning on getting a new Panasonic Arc 5, being a C or a D model, I’d say to go ahead and just buy it.

From previous experience, the improvements will likely be marginal and not really worth the wait, trouble and probably the price difference.

At least in Europe, models from the third generation revision C like the ES-LV9Q or ES-LV6Q are actually getting cheaper and are a lot easier to find.

As mentioned in the beginning, it’s likely that the new E models will only be released officially in Japan, making them more difficult to buy or to take advantage of the warranty.

And let’s not rule out the second generation Arc 5 with models like the Panasonic ES-LV65-S that can now be found at bargain prices, are still top performers and again, you can actually use the new foils of the third generation, at least the ones used until (and including) the revision D.

Speaking of that second-generation Arc 5, in 2019 Panasonic gave it a facelift and released two models, the ES-LV67 and ES-LV97. They’re basically the same as the older ES-LV65/ES-LV95 in terms of performance, so they’re a good alternative if you can’t get those anymore.

We will try to get one of the revision E models and review it so we can find out precisely how it compares to the already available Arc 5 shavers.

Images credit: panasonic.jp. Props to our reader Steven for the tip.