Panasonic is one of the three major players in the electric shavers industry alongside Braun and Philips Norelco.

Their high-end line is the Arc 5, currently at the third generation. They come with a massive 5 blade shaving unit that features the trademark arched profile of the foils (hence the Arc in the name).

This third incarnation of the Arc 5 family debuted in September 2015.

Just one year after the launch of this third generation, Panasonic rolled out a minor update, the revision B.

To differentiate them from the original ones, the international models feature a B instead of an A in their names: ES-LV6B-S, ES-LV9B-S etc.

The updates introduced by the rev. B are:

These newer shavers also use the same foils and blades as the previous ones and they look extremely similar overall. As a result, the actual shaving performance remained pretty much the same.

Note: Panasonic uses the term LAMDASH for the shavers sold on the Japanese domestic market.

The name is derived from the Greek letter LAMBDA (Λ) which also happens to have the value 30 in the Greek numerals system — corresponding to the bevel angle of Panasonic’s nano-blades.

In the summer of 2017 Panasonic quietly rolled out yet another revamp of its third gen Arc 5/LAMDASH shavers, the revision C.

At this moment they only appear to be available for the Japanese and European markets but can be ordered from sites like Amazon or eBay.

There’s also no official info regarding the availability of equivalent models specifically for the North American market.

Apart from a few presentation pages on Panasonic Japan website, the details of this update are pretty scarce.

You can tell the new shavers apart from the previous ones by the letter C in their model names — for example, ES-LV9C-S, ES-LV7C-A etc. These will likely become the international models.

The ones currently sold on the European markets follow a different name pattern: ES-LV9Q, ES-LV6Q, ES-CV51.

Here’s a table depicting all the different models in this update:

IMPORTANT: While all the models listed in the table above are waterproof and can be cleaned with water, the ones marketed as washable are intended for dry only use (so not suitable to be used in the shower). Since they will also work with the cord plugged in, the dry only operation is intended as a safety precaution.

The wet/dry models will only work cordless and are suitable for wet shaving.

The compact variations are particularly interesting; performance-wise they are fully-fledged Arc 5 shavers, being fitted with the same motors and cutting elements. They’re lighter and the reduced dimensions make them more suitable for traveling.

Here’s a side by side comparison:

What are the differences compared to the previous Arc 5 models?

I think we can all agree that these new Arc 5 shavers look stunning.

In my opinion, Panasonic absolutely nailed the design and construction of its third generation Arc 5 family and this C iteration is the best yet.

I can’t think of any shavers from the competition that can come close to the new Arc 5/LAMDASH design. They just ooze quality and hi-tech.

The new colors look classy and suit the overall aesthetics of the shavers perfectly.

You can tell that a lot of thought was put into the color schemes and I particularly like the gold accents around the shaving heads and the pearly metallic finish.

The blue and brown variations look spectacular in my opinion.

The man behind this is Panasonic’s brilliant product designer, Tomoaki Ino.

He is also responsible for the design of the new Panasonic LT Arc 3 razors.

It’s also worth mentioning that not all models in this lineup have a metal body (you can refer to the comparison table above to see which ones have it).

2. Advanced flexing of the shaving head

With this new update, I think Panasonic currently has the most advanced flexing shaving unit ever made.

With the new C revision, the shaving head can also twist (10 degrees) and slide back and forward (1mm). Here are two pictures that illustrate this:

Panasonic calls this Multi-flex 5-D and it should allow superior contact with the skin, especially when shaving under the chin and the neck area.

While I will only be able to confirm this claim after I review one, it is nevertheless an impressive technical achievement.

The compact models, namely the ES-CV70-S and the ES-CV51 have a fixed head. The 5 shaving elements can still move independently.

This is another novelty feature that is likely to wow you.

Available only with the ES-LV9CX and ES-LV9C/ES-LV9Q variations, this function automatically detects when you’re holding the shaver in your hand and unlocks it, allowing you to turn it on and shave. 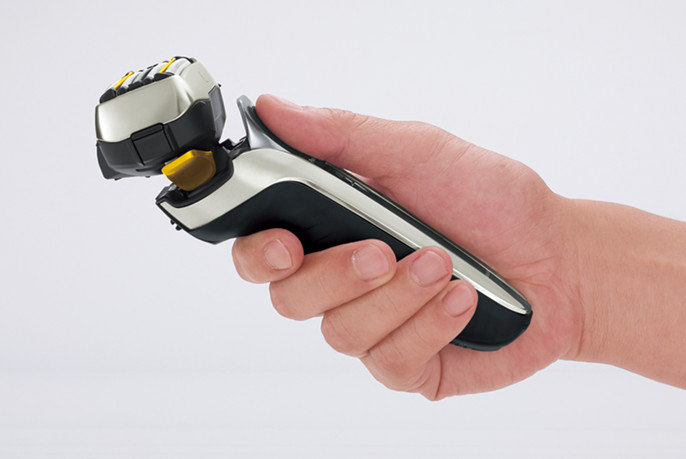 The mechanism also locks the shaver 60 seconds after you have released it to prevent erroneous operation.

This is basically a smart travel lock. Not entirely necessary, but quite the feat of engineering.

The rest of the shavers have a classic travel lock that is activated by pressing and holding the ON/OFF button.

It looks extremely similar to the older one (5 shaving elements, 2 comfort rollers) and at this point I cannot say with certainty what are the actual differences and improvements. The motor is the same punchy 14 000 CPM linear-drive unit.

The novelty seems to be the Power Quick Lift middle trimmer that captures longer hairs, by far the Achilles’ heel of all Panasonic shavers.

This trimmer is supposedly an improved version of the one found on the previous A and B Arc 5 models (called a Quick Lift Foil on those models). Right now I cannot tell if that’s really the case or is just a marketing gimmick.

UPDATE: After testing the compact ES-CV51 that comes with the updated trimmer, the improvements over the previous one seems to be negligible. It’s still not great with longer, flat-lying hairs.

The two inner blades however are the same used by all the other Arc 5 shavers, including the very first generation (part no WES9170).

In my opinion the improvements in shaving performance over the A and B revisions will be minimal, so if you can get those at a better price that’s probably the right decision.

The ES-LV9CX-S and ES-CV51/ES-CV70-S come with new hard storage cases. These look great and also offer excellent protection in the case of mechanical shocks.

Unfortunately the rest of the models only include Panasonic’s usual soft (cloth) pouch or soft (faux leather) case. You can check out the table above for a detailed overview.

The hard cases are also available separately (part no ES-2L13).

The range-topping versions — ES-LV9CX, ES-LV9C, ES-LV9Q, ES-LV6Q — feature a 10 stage multifunction display, while the ES-LV5C comes with a 5 stage display that shows the remaining battery in increments of 20%.

The rest of the shavers in the lineup feature a 3 stage indicator that only shows a High, Mid or Low charge status.

Available only with the ES-LV9CX-S, ES-LV9C-S, ES-LV9Q, ES-LV7C-T and ES-LV7C-A, the cleaning stations seem to be the same ones included with the A and B Arc 5 revisions.

While I don’t think you absolutely need one, Panasonic’s cleaning stations are arguably some of the best in business.

As expected, the models that include the cleaning station are more expensive than the ones that don’t.

The only changes come in the form of an improved beard density sensor that can detect variations up to 1.8 times faster compared to the C generation and a matte finish instead of glossy on the ES-LV7D and ES-LV5D versions.

The 2018 D models use the same foils and blades. Apart from the differences mentioned above, everything else remains unchanged.

Also, the Arc 5 presentation page on Panasonic.jp has been updated and only shows the revision D shavers, with the C models completely gone.

Here’s a table with all the models and differences:

Just like the revision C, only the range-topping ES-LV9DX and ES-LV9D feature the Smart Lock function. The compact models have remained unchanged in this revision D.

I am going to be perfectly honest and upfront and tell you that I am very intrigued by these new models and I am looking forward to reviewing one.

I’ve always appreciated the quality, performance and what is basically Panasonic’s take on the ultimate electric shaver. And this C/D revision of the Arc 5 family looks very impressive.

I am skeptical about their availability and success on the American and European markets, especially since the previous A and B models didn’t do too well either.

The price was (and still is) too high in my opinion and older generation Arc 5 shavers like the ES-LV65-S still offer great performance at bargain prices.

Moreover, the new foils and blades are backward compatible, even though Panasonic doesn’t say it explicitly.

However, this shouldn’t stop you from getting the new Arc 5 if you really want too. But keep in mind that at least at this moment you would have to pay a premium price for one and the replacement foils and blades are also very expensive.

It’s up to you to decide if it’s worth getting what looks (at least on paper) to be the most advanced electric shaver out there right now.